Murry Hammond founded Texas alt-country legends Old 97's together with Rhett Miller, and for almost 30 years has remained their psych-, garage- and folk-loving soul. In 2019, Murry discovered two more musical soulmates in Annie Crawford (keys) and Richard Hewett (drums), and together the band is wrapping up work on their first album with producer Mark Neill at his Soil of the South Studio in Valdosta, Georgia. Mark recorded Drag It Up by Old 97's and Murry's first solo album I Don't Know Where I'm Going But I'm On My Way, and has produced dozens of amazing artists such as J.D. McPherson, Dan Auerbach, and The Black Keys, with whom he won a Grammy for recording and producing their platinum breakthrough Brothers. Mark describes the band's sound as "a Southern Gothic Nick Drake experience" and they don't disagree. Murry also wants you to know that, "We heart the Carter Family and Syd Barrett, The Byrds and Hank Williams, Johnny Cash and The Pink Floyd, tambourines and a good UFO story. We're kinda all over the place, ha."

Some of Our Music

“"As a solo artist, Murry Hammond is a blend of Leonard Cohen and Jimmie Rogers. At his best, he is reminiscent of Gordon Lightfoot in his ability to bring the sepia-toned color of his stories into focus and make music that is provocative and breathtakingly beautiful."”

“Fans of alt-country pioneers Old 97’s know Murry Hammond as the affable chap on bass and backing vocals, but he’s stepped out of Rhett Miller’s shadow for his first solo album, and it’s a doozy.” 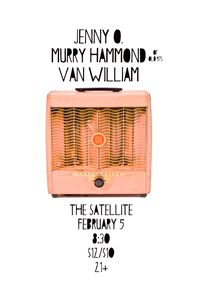 Murry Hammond, Jenny O and Van Williams at The Satellite